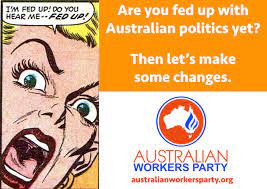 The Australian Labor party was formed by the workers unions in 1890. But now, when polled, more than half of the members of one trade union say they are losing support for the Labor Party because it is too focussed on inner city Woke Ideals like climate change and gender issues. For a quarter of members the betrayal was so bad they won't even vote Labor.

Working-class Aussies are abandoning the ALP in droves over the party's obsession with "woke" issues like gender, race and climate change.

Working-class Australians — the very foundation of the Labor Party — are abandoning the ALP in droves because they think the party has been overrun by "woke ideals" and "white-collar university educated yuppies".

Private research commissioned by the NSW Electrical Trades Union – which was itself just taken over by the Left this week – has found a quarter of union members surveyed no longer vote Labor and a further 35 per cent reported decreasing support for the party.

"…the perception of Labor as captive to trendy inner-city issues is killing the party."

"Support for the Labor Party among ETU NSW members has markedly declined in recent years – around 60 per cent of survey respondents report a decrease in their support with 25 per cent indicating they no longer vote Labor," the report said.

"Nearly a fifth of respondents now see the Liberal Party as the major party that best represents working people like them."