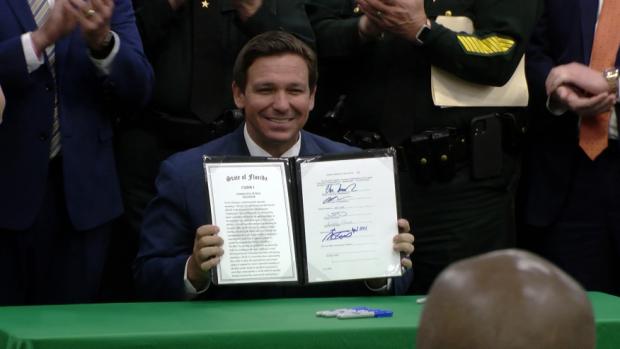 Florida Gov. Ron DeSantis on Monday signed a bill that intends to crack down on violent protests and riots in the state.

DeSantis, a Republican, signed the so-called "anti-riot" measure in Polk County, saying it is "the strongest anti-rioting, pro-law enforcement piece of legislation in the country."

The signing comes in the midst of protests, riots, looting, and arson incidents in several major cities around the United States in the wake of an officer involved-shooting death in Brooklyn Center, Minnesota. Meanwhile, a verdict is expected to be handed down by a jury in the murder trial of former Minneapolis officer Derek Chauvin, who was seen kneeling on George Floyd before his death—which sparked months of riots and demonstrations.

The law, known as HB1, increases criminal penalties for assault, defacing monuments, and vandalizing public property during riots. Local governments that interfere with law enforcement trying to contain violent demonstrations would be penalized. Meanwhile, a citizens' appeal process will be set up when counties and cities try to reduce their respective budgets of police forces.

On Monday, DeSantis said in the signing event that the left-wing cries of "defund the police" that echoed throughout Black Lives Matter demonstrations last year is an "insane theory" and is "not going to be allowed to ever carry the day in the state of Florida."

Democrats and the American Civil Liberties Union (ACLU) have said that the law is designed to intimidate Black Lives Matter and related protesters.