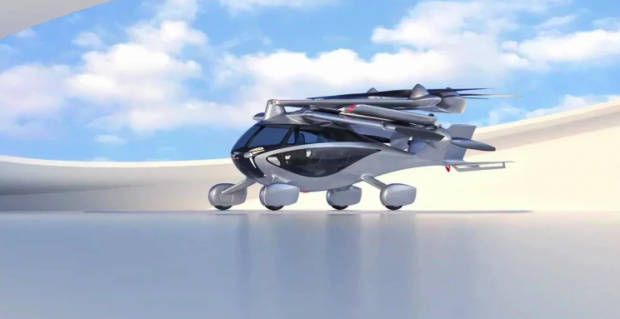 We last heard from Israeli/American startup NFT (no relation to the bizarre non-fungible token madness sweeping the crypto and collectible worlds) back in 2019. The original concept for the Aska was a similar roadable eVTOL aircraft design in a three-seat retro saloon body, with the VTOL fans mounted in holes in the car's hood and tail sections.

The new design looks much closer to the standard electric VTOL air taxi shape: a somewhat helicopterish teardrop cabin seating four, a small V-shaped tail, and a six-prop electric VTOL lift system. Four pure vertical lift props are mounted on long arms that swing back out of the way when you're not flying, and the other two are mounted on a set of wings.

These wings articulate their little hearts out. Not only do they automagically fold themselves in half and scissor back toward the tail to keep the car narrow enough to drive and park, they're also designed to tilt, so the middle two VTOL props and wing can point upward for vertical takeoff and landing, and then tilt fully forward for more efficient forward flight using the wing for lift and those two central props for forward propulsion.

In the same way, it can be used as a short takeoff and landing (STOL) aircraft if you've got access to a runway. Just point the middle props and wing forward, gain a bit of speed and take off like a regular ol' airplane. This is far and away the most efficient way to fly; VTOL operations suck juice like nobody's business.