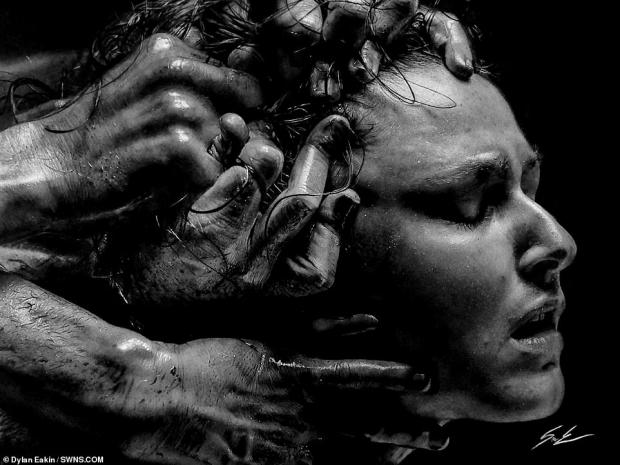 These hyper-realistic images may look like professional photographs but they are painstakingly-detailed drawings - created with charcoal.

Artist Dylan Eakin draws the intricate and incredibly lifelike pictures by using a photograph as reference and completes his artwork with charcoal, and occasionally a graphite pencil.

Dylan, 30, takes photographs of his girlfriend, roommate and friends and turns them into 18inch by 24inch (45cmx60cm) drawings.

From beads of sweat on a brow to individual eyelashes, Dylan's drawings - which employ a technique known as photorealism - look astonishingly realistic.

Each work takes around 100 hours to complete, with Dylan once spending 205 hours on a single artwork.

The pieces have become so popular that they now sell for around $6,000.

Photorealism is a genre of art in which an artist studies a photograph and then attempts to reproduce the image as realistically as possible in another medium.

Despite his incredible skill, Dylan, from New York, admitted that he is never satisfied with a picture.

He said: 'I wouldn't be at this level of photorealism if I was ever satisfied with a piece.

'If I ever delude myself into thinking something is perfect, I won't go on.'

Dylan, who only produces black-and-white images, added that he is not tempted to branch out into technicolor.

He added: 'Charcoal has always been a love.

'Once I realized how versatile it was, I've never seen the reason to branch out into color.

'I had someone try to commission a color portrait and I had no desire to do it.'