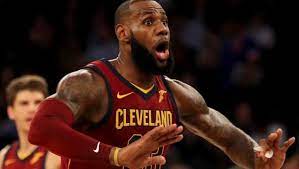 The picture is of the cop who shot the armed woman. The text: "YOU'RE NEXT" with an hour glass.

LeBron has been an outspoken supporter of Black Lives Matter and this latest tweet shows just how much he has bought into the coprolite that blacks are oppressed in modern-day America.

Lenin would have loved LeBron.

As Lenin put it:

and LeBron proves this point.

Outside of basketball, LeBron is simply one of the masses.

He has no idea about the history of the positions he is promoting or where they lead.

But besides not understanding the history, he obviously can't even think on a simple level about the shooting in Columbus, Ohio of a knife-wielding woman.

Episode 401 The Markets Are Rigged