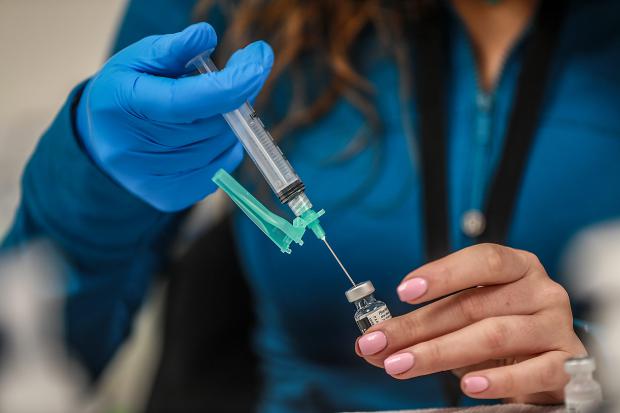 Michigan has become a bellwether for the coronavirus pandemic, with cases rising rapidly even as the vaccine rollout sped up over the past few weeks, a trend mirrored nationwide.

Now, the U.S. is approaching the 'tipping point' of vaccinating the maximum number of people who actively want the shot, and reaching a stalling point, a recent Kaiser Family Foundation report warned.

Enough people have now been vaccinated that the remaining Americans are among the 20 percent of Americans who are vaccine hesitant. And nearly 40 percent of Republicans still say they do not want a COVID-19 vaccine.

And Michigan appears to be one of the first states to teeter on that edge, just after reaching nearly pandemic-high daily case rates, with 7,000 new positive tests a day for the past two weeks in the state. Daily infections have finally fallen slightly to 6,891 a day on Tuesday, according to Johns Hopkins University data.

Vaccine coverage in the state had been steadily rising by two to four percentage points a week since late January.

Last week, it began to stall, with vaccine initiation only rising from 45.4 to 46.1 percent, and vaccination completion ticking up by just over one percentage point from 31 percent to 32.2 percent.

The increase in the share of the population that initiated vaccination as of last week was 83 percent smaller than the increase seen the previous week, according to a DailyMail.com analysis of Michigan health department data.

Nationwide, the average number of daily vaccinations have remained above three million for 20 days, but for the past three days, between 1.8 and 2.6 million shots have been given.

It comes after a week of daily average U.S. cases hovering around 70,000 a day. Daily infections have begun to decline slightly to 63,232 a day, including 62,857 cases diagnosed yesterday.

And deaths continue to fall to an average of 702 a day, down seven percent from last week's seven-day rolling average.

But with the rise in infections and hospitalizations seen last week, and vaccinations slowing, those numbers could rise again, as happened in Michigan.