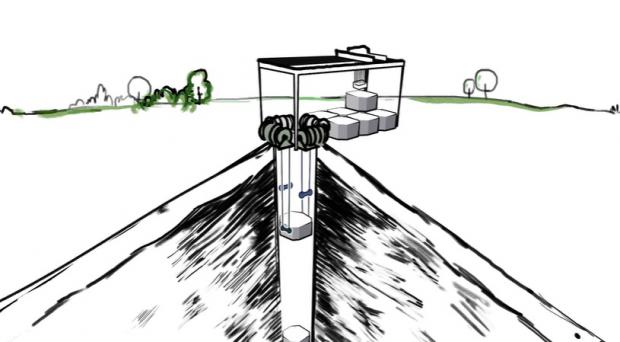 The firm is called Gravitricity, and their device, which has a 25-year lifespan, could help prevent the mining of rare earth minerals in the creation of lithium-ion batteries, while providing a cost-effective alternative for renewable storage.

Costing £1 million ($1,385 million) to build a 15-meter (49-foot) tower with a 25-ton weight, Gravitricity say the prototype can generate 250 kilowatt hours, and deliver electricity in less than a second when demand occurs.

The device has been designed to go in old mine shafts rather than up in the air, and "These tests confirm our modeling and show that gravity energy storage is a serious contender in the global energy storage market," said company managing director Charlie Blair.

The technology relies on sending excess power from renewables, such as wind power, into cable pulleys that slowly hoist a heavy weight up the tower, storing potential gravitational energy that is released back into the system as electricity when the weights are lowered.