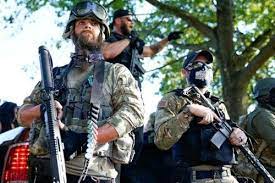 Gun confiscation has always been the Holy Grail of totalitarian regimes. Without disarmament, fully centralized control of a population is not possible. And though it is true that not every evil regime seeks to disarm every single citizen (at least not right away), they always disarm the people they specifically intend to hurt the most.

For example, gun control advocates today like to point out that the Third Reich in Germany did not disarm the entire German population. This is a rather bizarre position for leftists as they continually wail and scream about Nazis around every corner and behind every tree, but they will STILL defend their gun grabbing policies by arguing that the Nazis were not as bad as conservatives assume. Of course, what they rarely mention is that the Nazis DID disarm millions of people; most of them Jews and political opponents under 1938 German gun laws.

The National Socialists disarmed the people they planned to destroy. It's not hard to figure out why; they didn't want their targets to be able to fight back. They allowed their political supporters to keep their weapons legally; this is not a relaxation of gun laws, in fact, it's the reverse – It is selective enforcement of gun confiscation based on ideological loyalty.

Hilariously, leftists in the US when confronted with this fact double down on their gun control arguments. Instead of admitting their foolish error they will say: "Yes, the Nazis disarmed the Jews and others, but having guns would have made no difference in saving their lives…" And there you have it – The most backwards circular logic of all time. If Jews and others owning guns was not a deterrent to their slaughter, then why would the Nazis bother disarming them in the first place? Leftists have no answer to this question.

They are trying to argue against facts using a hypothetical; really, how would they know? Maybe owning guns might have saved the lives of millions of people the Nazis had deemed enemies of the state? Maybe it would have acted as a deterrent to the Holocaust? Maybe the Nazis would have been afraid to expand tyranny into Europe if they had to worry about their own population fighting back and disrupting their momentum? Maybe, WWII would have never happened? We could argue hypotheticals all day long…

What we do know for certain is that disarmament is ALWAYS one of the first steps by totalitarians in cementing their control of a population, and this is most common among the biggest political killers in modern history – And no, it's not the Nazis; it's the communists.