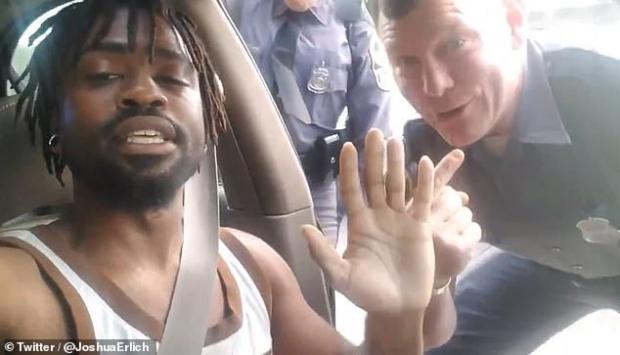 A Virginia State Trooper has been fired following a viral video that shows him threatening a black man during a 2019 traffic stop.

He then tells Thompson: 'You're going to get your a** whooped!'

Thompson's lawyer, Joshua Erlich, said he was told in talks held during settlement of a lawsuit that Hewitt was fired for cause in February.

A spokeswoman for Virginia State Troopers, Corinne Geller, confirmed that Hewitt was no longer with the force, but said she was prohibited from releasing further details.

Erlich said the federal lawsuit claiming Thompson had been assaulted and had his constitutional rights violated by the trooper was settled this month for $20,000, with no admission of wrongdoing by the state.

'Mr. Thompson filed this case because Trooper Hewitt's behavior was unconscionable, and Mr. Thompson is happy with the outcome,' Erlich told The Washington Post.

'He thought he deserved — and received — monetary compensation.

'And although the VSP did not admit to any wrongdoing, Mr. Thompson is heartened Trooper Hewitt is no longer on the street and thinks Virginia is safer for it.'

Thompson was pulled over by Hewitt and several other troopers while driving to his job at the Cheesecake Factory in Tysons Corner.