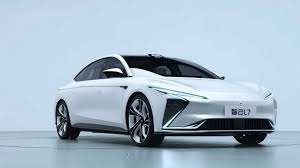 The fact that China is making some very believable and world class electric cars is no longer surprising to anyone. Chinese companies with little prior car making experience are even dabbling in the world of luxury and sports electric cars and their efforts are still solid, both in terms of the look of these vehicles, as well as their performance and specs.

Just check out the Zhiji L7, a fully-electric sports sedan that not only looks pretty good, but it also promises decent range, a state of the art interior, great range and even wireless charging. Zhiji is the result of a joint venture between SAIC, Zhangjiang Hi-Tech and the Alibaba Group.

At first, the vehicle will be offered with a 93 kWh battery pack that will bestow it with an NEDC range of 382 miles (615 km), but a larger 118 kWh pack will be offered in the future, boosting the claimed range to 621 miles (1,000 km). The latter probably won't be available at launch, which has been set for the first part of 2022.

The vehicle has a claimed 540 horsepower and 516 pound-feet (700 Nm) of torque and a nought to sixty time of 3.9 seconds. There's also semi-autonomous driving tech in this vehicle, but we don't exactly know how capable the vehicle will be, and it even has cameras instead of traditional side-view mirrors. Another standout feature will be the L7's ability to wirelessly charge at up to 11 kW.