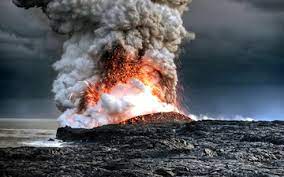 Scientists at the University of Leeds in the UK have gathered data via remotely operated vehicles from deep-sea volcanic activity in the Northeast Pacific. They found that ocean volcanoes were as intriguing to study as volcanoes on land, although the observer doesn't get as spectacular views from ocean-erupting volcanoes as from those on land.

The University of Leeds scientists suggest in their research, published this week in the journal Nature Communications, that submarine volcanoes create the so-called hydrothermal megaplumes when they erupt. The researchers estimate that extremely high rates of energy are being discharged during those eruptions.

"The rate of energy released and required to carry ash to the observed distances is extremely high – equivalent to the power used by the whole of the USA," the University of Leeds said about the research carried out by Dr Sam Pegler, from the School of Mathematics, and Dr David Ferguson, from the School of Earth and Environment.

The rapid release of immense energy from submarine eruptions means that submarine volcanic eruptions lead to the rapid emptying of reservoirs of hot fluids within the earth's crust. As the magma forces its way upwards towards the seafloor, it drives this hot fluid with it, the scientists say.

Energy Independence is More Important Than Ever for the U.S.