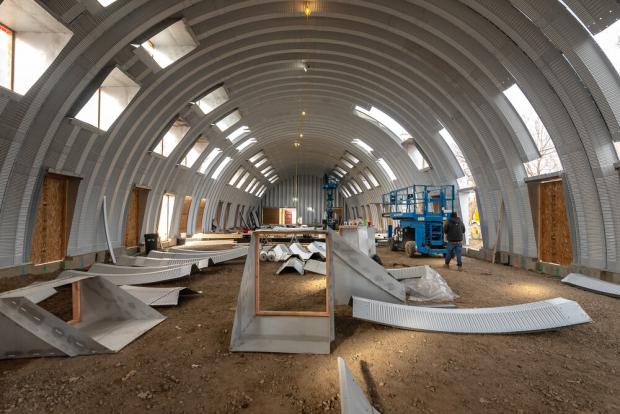 On a half-vacant block a few miles outside of downtown Detroit sits an unabashed oddity. Nearly 200 feet long and 23 feet high, it's a gleaming half-cylinder of metal surrounded by trees. Built out of a military-style Quonset hut and plopped into the dwindling remnants of a residential neighborhood, this alienlike arched steel structure may be the world's most unexpected new apartment building.

Dubbed the Caterpillar, the steel structure is a window-pocked eight-unit residential building, with bright white interior spaces and ceiling heights that rent for less than most other new apartments in the city. Its basic architecture is the Quonset hut, the prefabricated, quick-to-build utilitarian structure originally developed by the U.S. Navy during World War II. Today, the huts are typically used for storage on farms. In Detroit, however, the low-cost Quonset hut is being reimagined as the residential structure of the future.

The Caterpillar was developed by Philip Kafka, a real estate investor and developer who has now built several simple Quonset-hut-based residences in Detroit. The huts themselves were sourced directly from a manufacturer, and their ease of construction helped keep the project's cost much lower than traditional buildings: the Caterpillar cost just $1.5 million. With simple interiors and an emphasis on outdoor space, these projects are Kafka's attempt to inject affordable but well-designed buildings into the city.