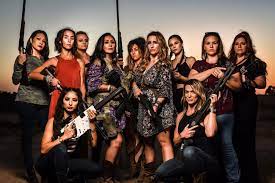 The founder is from Stockton. Their website shows they're pro-gun and anti-vaccine.

In 2019, the group was called "The Freedom Angels," and was seen at the California State Capitol trying to block student vaccinations.

Now, they say they're trying to arm women with survival skills, and are encouraging others to join their movement.

"We train you on natural medicine, we train you on how to navigate the forest," said the founder of Mamalitia, Denise Aguilar, in a video posted to her Facebook Page.

It started as a group of moms condemning vaccine mandates, and then the COVID-19 vaccine.

You'll see them marketing themselves on their website toting big firearms, but on Facebook, Aguilar denies this is an extremist group and says they've never shown violence.

"We are not violent, we have not been on a watchlist. We are simply a group of women who are training each other and networking together," she said.

Dr. Richard Carpiano is a professor of public policy and sociology at the University of California, Riverside who has followed the group and its movements on social media since its founding.