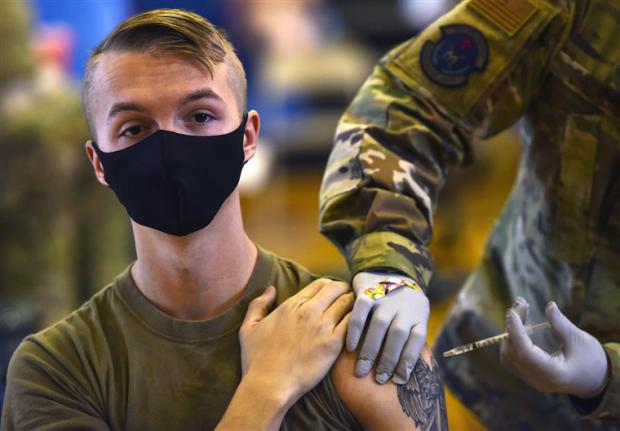 This would also mean that anyone wanting to enter military service would have to receive the jab as a requirement to get in, which would likely cause a blow to military recruitment in the near-term. However, he didn't outright say he's ready to pull the trigger on the policy, which if enacted would constitute the largest federal government-ordered mandate in terms of forcing the vaccine on some 1.3 million active duty service members, not to mention over one million more reserve personnel.

Describing the decision as a "tough call" he suggested it was being hotly debated. "I don't know. I'm going to leave that to the military," Biden told NBC News's Craig Melvin.

"I'm not saying I won't. I think you're going to see more and more of them getting it. And I think it's going to be a tough call as to whether or not they should be required to have to get it in the military, because you're in such close proximity with other military personnel."

In follow-up to Biden's comments, national security advisor Jake Sullivan confirmed that a DoD-wide vaccine mandate is "something the Department of Defense is looking at in consultation with the interagency process and [I] don't have anything to add on that subject today."

The whole debate was sparked in earnest when multiple headlines earlier this month took note of the large numbers of military members who were rejecting the vaccine.

For example, one recent USA Today report noted that nearly 40% of US Marines who have been offered a COVID-19 vaccine have refused to recieve it, according to Pentagon figures. And an earlier report in The Guardian described that "Reluctance to be vaccinated for Covid-19 is now rife in the US military, with about a third of troops on active duty or in the national guard refusing to be administered the vaccine."