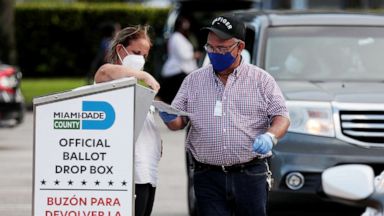 If signed, it would require signature verification for voters, provided by a "wet signature" physically signed on paper kept on file, and access to drop boxes would be limited to early voting hours unless they are located at election supervisors' offices. Drop boxes would also have to be monitored in-person by an elections official, and ID would be required when dropping off ballots.

Other aspects in the bill include limitations on who can return a finished mail-in ballot, preventing election officials from entering consent agreements, and requiring voters to request a mail ballot every election cycle, rather than every two, as under current law.

The legislation would also ban anyone from "engaging in any activity with the intent to influence or effect of influencing a voter" but allow election supervisors to provide "non-partisan assistance," such as giving items, including food and water, to voters within the restricted zones.

The bill also requires supervisors to set and publish drop box locations 30 days before the election. Those locations cannot be moved for any purpose.

SB 90 was amended from a previous stricter version which had originally banned drop boxes completely.