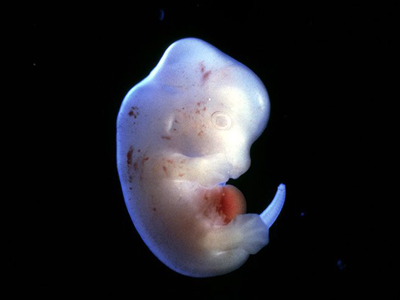 The embryos, which were derived from a macaque and then injected with human stem cells in the lab, were allowed to grow for 20 days before being destroyed.

We have a term for this type of life form: a chimera, named after the fire-breathing monster of Greek mythology that was part lion, part goat and part snake. It's hoped that part-human chimeras—essentially animal bodies with some human organs or other characteristics—might one day offer clues to help us treat human diseases, as well as providing organs to transplant to humans. But for these purposes, part-human chimeras will first have to be born, and this research takes us one step closer to that eventuality.

That's ethically controversial, because these creatures could possess an ambiguous moral status: somewhere between that of humans, which we don't tend to experiment upon, and animals, which we do. How we end up treating part-human chimeras will depend upon the moral status we assign them—a task that these latest embryonic experiments only makes more pressing.

There are several rationales for pursuing this line of research. Human-monkey chimeras could be created to study parts of the brain, for instance, so we can better understand Alzheimer's disease. Another goal is to grow human organs for transplantation by "deleting" the relevant organ from the animal's genetic instructions, and replacing it with human stem cells to fill the developmental niche.