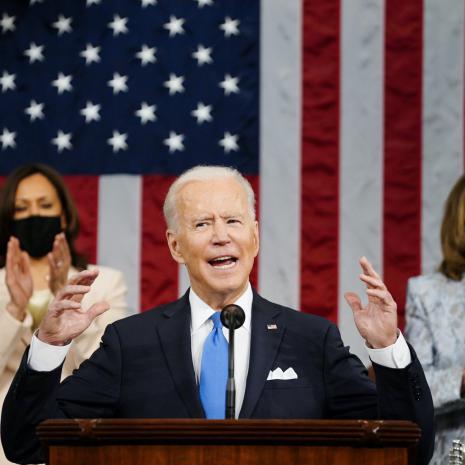 Biden followed up his  $2.25-trillion American Jobs Plan that he rolled out only weeks ago with a $1.8-trillion American Families Plan that includes new spending on child care, universal pre-K schools, and two years of community college to every American. He also called on Congress to increase the minimum wage to $15 a hour. He pledged to raise taxes on corporations to pay for his American Jobs Plan. He proposed unconstitutional gun-control measures, saying "No amendment to the Constitution is absolute." He wants liberalization of  immigration policies with a pathway to citizenship for millions of illegal immigrants. Finally, he called on Congress to pass a federal-election bill that critics warn will rig elections indefinitely on behalf of the Democratic Party. -GEG

In his first major address as president, President Biden on Wednesday night pitched expansion of the U.S. government with over $4 trillion in new spending on child care, tuition free community college, infrastructure and green energy investments.

After 100 days of recovery, Biden said America is "ready for a takeoff."

"After just 100 days, I can report to the nation that America is on the move again," Biden said during his address on the House floor. "America is rising a new."

His American Families Plan includes new spending on child care, universal pre-K and offering two years of community college to every American. The American Jobs Plan is focused on physical infrastructure such as roads, bridges, ports and airports.

An America where your kids can't afford to keep your money: Middle income families'...

BREAKING: There's A DEEPER Truth To The Unrest!