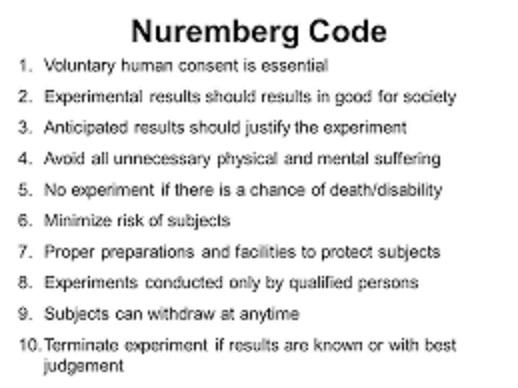 Question: Should Medically-degreed Physicians in the NIH, the CDC, the NIAID and the FDA (all of whom presumably pledged the Hippocratic Oath at the beginning of their medical careers) Who Then Vigorously Promoted the Untested (Long-term), Experimental Emergency Use Authorized (EEUA) Covid-19 Vaccines, be Subject to the Nuremberg Code of Ethics? (And Should They be Prosecuted if Found Guilty, Given the Fact that the Vaccine Recipients Have NOT been Fully Informed About the Unknown Long-term Risks of the Experimental Vaccines)?

The Doctors Trial considered the fate of twenty-three German physicians who either participated in the Nazi program to euthanize persons deemed "unworthy of life" (the mentally ill, mentally retarded, or physically disabled) or who conducted experiments on concentration camp prisoners without their consent. The Doctors Trial lasted 140 days. Eighty-five witnesses testified and almost 1,500 documents were introduced. Sixteen of the doctors charged were found guilty. Seven were executed.

1. Between September 1939 and April 1945 all of the defendants herein, acting pursuant to a common design, unlawfully, willfully, and knowingly did conspire and agree together and with each other and with diverse other persons, to commit war crimes and crimes against humanity, as defined in Control Council Law No. 10, Article II.
2. Throughout the period covered by this indictment all of the defendants herein, acting in concert with each other and with others, unlawfully, willfully, and knowingly were principals in, accessories to, ordered, abetted, took a consenting part in, and were connected with plans and enterprises involving the commission of war crimes and crimes against humanity.

A Group Of Parents Sent Their Kids' Face Masks to A Lab for Analysis. Here's What They Found