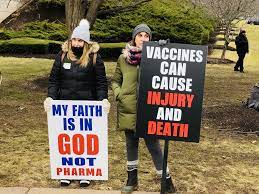 "Serious illnesses that have been well-controlled for many decades, such as measles, tuberculosis, and whooping cough... have reemerged," Lamont said in a statement.

"The number of children in our state who have not received routine vaccinations has been steadily increasing, which has been mirrored by significant growth in preventable diseases across the nation," he continued.

Parents may still choose not to vaccinate their children on medical grounds, but the "bill best ensures that other children and their families will not be exposed to these deadly diseases for hours each day in our schools," Lamont said.

The measure applies to public and private schools, higher education institutions, and children in daycare settings.

The bill was voted in the majority Democrat Connecticut Senate on Tuesday and passed 22 to 14, Hartford Courant reported. All Republican Senators voted against it, while all but two Democrats voted for it. The new legislation will take effect at the beginning of the 2022 school year.