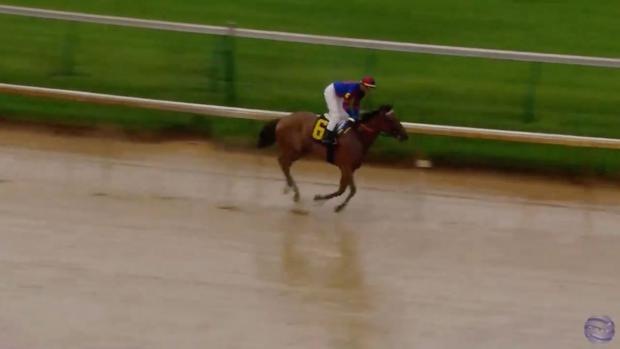 A horse named after Breonna Taylor and owned by her family's attorney won a prestigious pre-Kentucky Derby race at Churchill Downs on Thursday.

Breonna, a three-year-old filly owned by Taylor family attorney Sam Aguiar and his wife Janelle, was a decisive winner in wet conditions during the six-furlong race on Thursday.

Taylor, a 26-year-old emergency medical technician, was shot and killed by police executing a no-knock warrant in March 2020.

Aguiar's wife Janelle said naming the horse after Breonna Taylor was a way of keeping her name in the spotlight.

'The horse is resilient and beautiful,' Aguiar told the station.

Wife Janelle wrote on Facebook: 'Any time we win a horse race is exciting.

'But it takes it to a new level when you name your horse Breonna in honor of #BreonnaTaylor, the horse wins at Churchill Downs on Derby week, and you hear so many people #SayHerName'.

The couple owns about 20 horses through JS Stables, LLC -- a thoroughbred racing operation. They said it was the most thrilling victory of Breonna's blossoming career.

On Saturday afternoon, Medina Spirit stormed to victory in the Kentucky Derby on Saturday to deliver trainer Bob Baffert a record seventh win in the Run for the Roses.