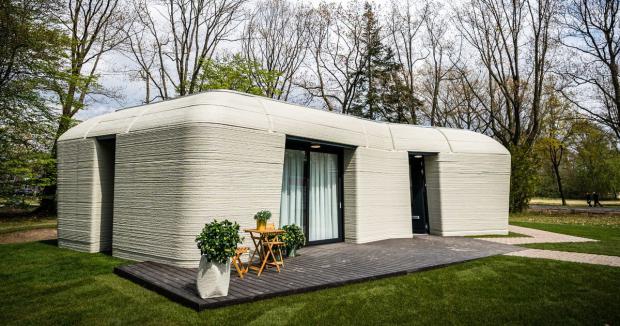 A Dutch couple have moved into Europe's first 3D-printed home - which developers claim can be built from scratch in just five days.

Retired Elize Lutz, 70, and 67-year-old Harrie Dekkers' new home in Eindhoven, in the Netherlands, is a 94-square metre two-bedroom bungalow that resembles a boulder with windows.

Despite the curving lines of its grey concrete walls looking and feeling natural, they are actually the result of cutting-edge housing construction technology in the Netherlands and around the world – they were 3D printed at a nearby factory.

'It's special. It's a form that's unusual, and when I saw it for the first time, it reminds me of something you knew when you were young,' Ms Lutz said. She will rent the house with Mr Dekkers for six months for £695 per month.

For now, the house looks strange with its layers of printed concrete clearly visible — and even a few places where printing problems caused imperfections.

But in the future, as the Netherlands seeks ways to tackle a chronic housing shortage, such constructions could become commonplace. The country needs to build hundreds of thousands of new homes this decade to accommodate a growing population.