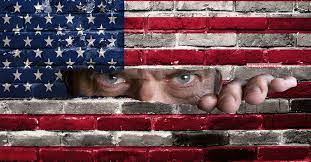 In 2021, there is no denying that the United States is a full-on surveillance state. The Biden Administration attempts to remove all pretense of privacy with its new consideration to use outside firms to track "extremist" chatter by American citizens online. But what exactly is an "extremist?" According to Tulsi Gabbard, recent efforts essentially criminalize half the country:

"It's so dangerous as you guys have been talking about, this is an issue that all Democrats, Republicans, independents, Libertarians should be extremely concerned about, especially because we don't have to guess about where this goes or how this ends," Gabbard said.

She continued: "When you have people like former CIA Director John Brennan openly talking about how he's spoken with or heard from appointees and nominees in the Biden administration who are already starting to look across our country for these types of movements similar to the insurgencies they've seen overseas, that in his words, he says make up this unholy alliance of religious extremists, racists, bigots, he lists a few others and at the end, even libertarians." (source)

(So basically, if you're reading this website, you're probably an "extremist" in someone's point of view.)