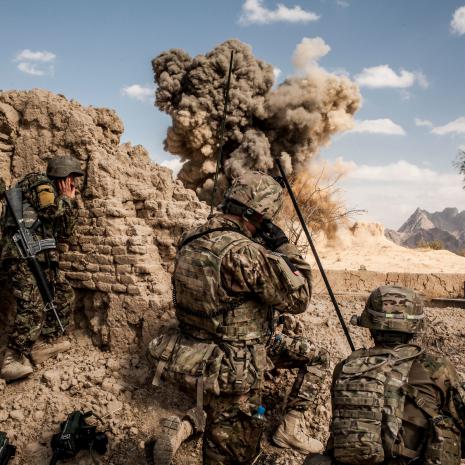 Because they are so profitable to powerful and well-connected special interests. In fact, the worst news possible for the Beltway military contractor/think tank complex would be that the United States actually won a war. That would signal the end of the welfare-for-the-rich gravy train.

In contrast to the end of declared wars, like World War II when the entire country rejoiced at the return home of soldiers where they belonged, an end to any of Washington's global military deployments would result in wailing and gnashing of the teeth among the military-industrial complex which gets rich from other people's misery and sacrifice.

Would a single American feel less safe if we brought home our thousands of troops currently bombing and shooting at Africans?

As Orwell famously said, "the war is not meant to be won, it is meant to be continuous." Nowhere is this more true than among those whose living depends on the US military machine constantly bombing people overseas.

How many Americans, if asked, could answer the question, "why have we been bombing Afghanistan for an entire generation?" The Taliban never attacked the United States and Osama bin Laden, who temporarily called Afghanistan his home, is long dead and gone. The longest war in US history has dragged on because…it has just dragged on.

So why did we stay? As neocons like Max Boot tell it, we are still bombing and killing Afghans so that Afghan girls can go to school. It's a pretty flimsy and cynical explanation. My guess is that if asked, most Afghan girls would prefer to not have their country bombed.