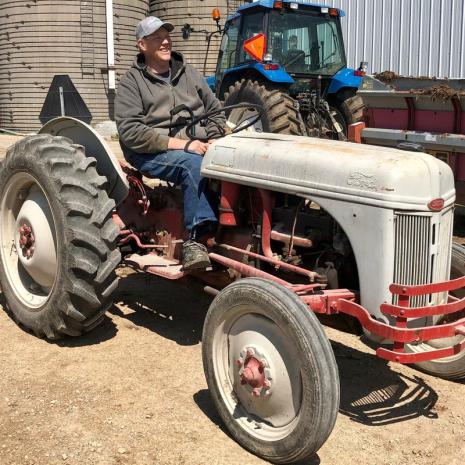 A dairy farmer in Wisconsin who is physically disabled has sued the Biden administration over a COVID relief program that excludes white farmers, arguing the program is racist.

Adam Faust, who runs a herd of 140 Holsteins on his family farm in Chilton, joined other plaintiffs in the lawsuit filed last week in Green Bay, alleging the loan forgiveness program illegally discriminates against them.

At issue is a $4 billion program tucked into the Biden administration's COVID-19 stimulus plan that forgives loans for farmers and ranchers who are black, native American, Hispanic, or Asian - but not those who are white.

'It was just out and out racist, and I really don't think that there should be racism allowed in the federal government at any level,' Faust told WLUK-TV.

Faust was born with spina bifida, a rare birth defect, and his leg was amputated after a farm accident later in life resulted in an infection.

Last year his other leg was amputated due to complications from diabetes, and he now uses two prosthetic legs.

On Wednesday night, Faust appeared in an interview on Fox News, and  argued that it was unfair to create racial criteria for participation in the relief program.

'I mean, racism against anybody is wrong. We can't have a government picking and choosing who they are going to give any program to based solely on the color of their skin,' he said.

'Everything that we have all learned growing up, is "racism was wrong", and now, all of a sudden, the federal government seems to think that racism is acceptable in certain ways,' he said.