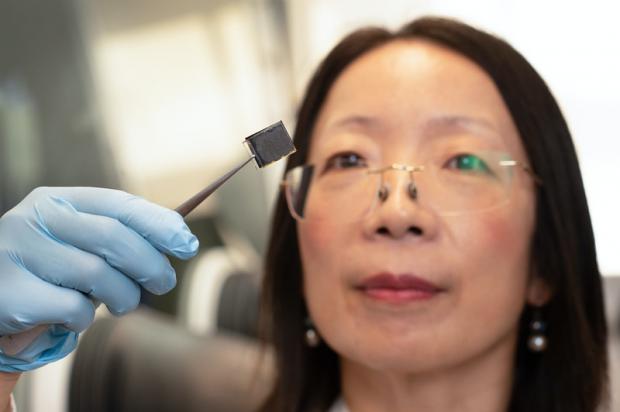 In a study, the researchers led by Professor Hongxia Wang in collaboration with Associate Professor Prashant Sonar of QUT's Centre for Materials Science showed the carbon nanodots could be used to improve the performance of perovskites solar cells.

Perovskites solar cells, a relatively new photovoltaic technology, are seen as the best PV candidate to deliver low-cost, highly efficient solar electricity in coming years. They have proven to be as effective in power conversion efficiency as the current commercially available monocrystalline silicon solar cells, but the hurdles for researchers in this area is to make the technology cheaper and more stable.

Unlike silicon cells, they are created with a compound that is easily manufactured, and as they are flexible they could be used in scenarios such as solar-powered clothing, backpacks that charge your devices on the go and even tents that could serve as standalone power sources.

This is the second major piece of research to come as a result of a human hair derived carbon dots as multifunctional material.

Last year, Associate Professor Prashant Sonar led a research team, including Centre for Materials Science research fellow Amandeep Singh Pannu, that turned hair scraps into carbon nanodots by breaking down the hairs and then burning them at 240 degrees celsius. In that study, the researchers showed the carbon dots could be turned into flexible displays that could be used in future smart devices.

CHECK OUT: World's First Home Hydrogen Battery Powers Your House for 3 Days, is Recyclable, and Not a Fire Risk

In this new study, published in the Journal of Materials Chemistry A , Professor Wang's research team, including Dr Ngoc Duy Pham, and Mr Pannu, working with Professor Prashant Sonar's group, used the carbon nanodots on perovskite solar cells out of curiosity. Professor Wang's team had previously found that nanostructured carbon materials could be used to improve a cell's performance.