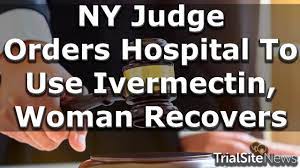 One dose of Ivermectin was all it took to get 81-year-old John Swanson off the ventilator. John's wife Sandra could not believe it. His story is remarkably similar to other cases of patients who were on their way out with advanced COVID-19 but saved when Ivermectin was added.

Ralph Lorigo is the lawyer who now has won three court orders forcing New York hospitals to administer Ivermectin to dying patients. Incredibly, these three hospitals and their lawyers fought against the patients, arguing they did not have the right to receive the drug despite a valid prescription written by their doctors. In essence, the argument was that they did not have the right to try a potentially life-saving medication.

Judith Smentkiewicz made national news in January when her family hired Lorigo after the hospital refused a fourth dose of Ivermectin. Smentkiewicz's son and daughter called Ivermectin a "miracle drug" in court papers. Attorney Lorigo and his associate Jon F. Minear reported, "This lady was on a ventilator, literally on her deathbed, before she was given this drug. As far as we're concerned, the judge's order saved this woman's life."

Are We Overdosing on "Hopium?"