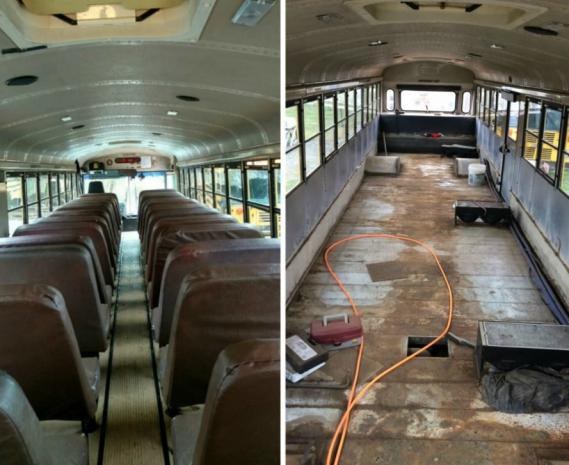 A couple has revealed they have been called 'crazy' for selling their perfect home and spending over $100,000 renovating a bus - leaving them without any savings.

Hannah Lane, 24, from Kentucky, and her husband Cody Lane, 33, from Wyoming, met in 2015 while she was in college. The duo hit it off immediately and within one year, they were engaged.

'As soon as we saw one another, something just clicked between us,' she said. 'After we discovered we had lots of the same passions and goals, I knew I had met my soulmate, and a year later, we were engaged and went on to wed in 2017.'

After Hannah graduated in 2018, she began working as a marketing coordinator while Cody started a new career as an account manager.

'We owned a beautiful home together. We were super settled in life - but despite all of this, something just didn't feel right for us,' she explained.

'We constantly had this feeling like we were living to work, instead of working to live, and we knew there and then that something needed to change.

'I had been seeing lots of videos on social media of people living in tiny homes and something about having less space and being able to travel full-time really appealed to us.'

They knew they would have to keep working in some capacity if they were to take their life on the road, but they figured they could make a living while discovering new places in their mobile home.

Luckily, the pair already had $25,000 in savings due to their modest lifestyle, but they knew they needed some extra cash to help make their dream a reality.