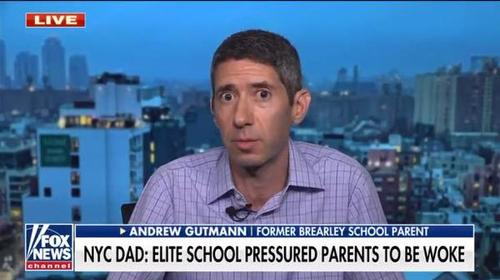 It turns out that, once you ignore cancel culture make a statement, there are a lot of people who want to follow your lead.  One of those parents, to his surprise, found himself at the head of a brewing revolution.

Three weeks ago, two letters exploded on the New York education scene and started echoing through the rest of America.  The first was from a teacher challenging Grace Church High School's anti-white Critical Race Theory indoctrination.  The second letter was from Andrew Gutmann, who spoke out against the same indoctrination at the Brearley school.  Both schools are expensive, claim to be elite, and are teaching a doctrine every bit as toxic as the Jim Crow eugenics garbage that Democrats promoted in the first half of the 20th century.

While the teacher's letter was an eye-opener, the fact that Gutmann is a parent meant that his letter resonated with parents across America.  To his surprise, he's found himself leading the charge for these parents.  In an opinion piece in the New York Post, Gutmann describes the positive feedback he's getting, as well as the fact that there is a huge battle ahead for those parents unhappy about the hard left turn their children's education has taken:

I am enormously gratified by the overwhelmingly supportive emails and messages that I have personally received. Countless parents expressed to me their appreciation for stating clearly and forcibly what so many Americans have been thinking but have been too afraid to state out loud. Many also conveyed that they felt newly emboldened to speak up for their children. I have learned that my letter has been circulated and discussed in Board of Trustees meetings of schools across the country and I have been told that it has begun to make an impact. Even Brearley, after initially dismissing the contents of my letter and indicating a desire to double down on antiracism initiatives has, for the very first time, offered parents an opportunity to ask questions about the school's diversity, equity, inclusion, and antiracist initiatives.

That's the good news.  The bad news is that Gutmann learned from the outpouring of messages that, in a single year, Critical Race Theory has become deeply embedded in American education from kindergarten through to graduate work: