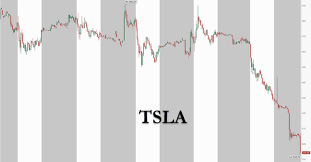 On that note, Tesla shares are getting pasted to the tune of another 6% on Tuesday in the pre-market session, following through on yesterday's nearly 5% plunge and helping drag down S&P futures 0.7% heading into the cash open. Nasdaq futures are down 1.3% at the same time, setting up what could be an ugly follow through for the likes of Tesla uber-bull Cathie Wood's ARK Innovation ETF heading into mid-week.

The plunge in shares is being attributed to the overall slump in tech stocks, but also on a Bloomberg report that Tesla had halted its plans to buy new land in Shanghai and that sales in China have fallen.

The company reportedly halted plans to buy land to expand its manufacturing facility and turn it into a worldwide export hub due to "trade tensions" between the U.S. and China. The company currently uses its China facility to export to Europe, "Tesla now intends to limit the proportion of China output," Reuters reported.

But we can't help but notice: there have been "trade tensions" between the U.S. and China throughout the last few years anyway. Could it be that halting the expansion of the facility was a result of growing tensions between China and Tesla, and not China and the U.S.?

Recall, just days ago, we highlighted yet another deadly crash involving a Tesla - this one in China. And the country's state-run Global Times was quick to shame the automaker as a result. It published a horrifying image of a Tesla vehicle rear-ending a truck in Shaoguan, South China's Guangdong Province on Friday, "killing the electric car's driver on the spot."