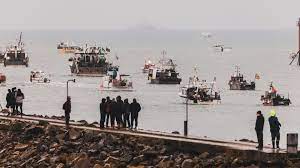 60 French fishing vessels were protesting at slow licensing. But naval ships from both sides were even called in to patrol the area, the situation has been defused.

Surely the UK government must be working out that electricity supply is a major tool for foreign disputes.  Currently about 10% of the UK electricity comes in via undersea cables*, but that is set to rise to 25%, according to the Daily Mail. Surely alarms are ringing? This is not even the first time this outrageous threat was made. Macron himself threatened it last October too. See "Hands Up! Your money or your Fish!"

There is a very uneasy power balance here: The right to fish in British waters is worth about 650 million euros to EU fishermen, but European energy markets were worth up to £2.3 billion for the UK.

Not only does it leave the UK in a weaker negotiation position, but a selfish foreign player could also ambiguously twist the knife with well timed, deniable, cable accidents costing millions of dollars and wreaking havoc. A blackout in 2017 left many travellers trapped in underground train systems for hours, with many resorting to mobile phone "torches" to find their way out. Chaos.

Smart political players lecture gullible patsies on setting "net zero" targets to change the weather, while making sure they use nuclear power or just repeatedly fail to meet their own targets.

In this case both leaders are playing a popular vote-winning card for their domestic audiences. There is a lot of puffery theater going on. But underneath that are very real vulnerabilities that will matter when things unravel due to pandemics, wars or economic crashes.