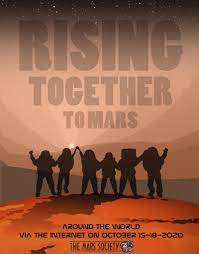 In exactly that sense, it's been "interesting" to listen to the other speakers at this conference as they try, one after another, each in his own way, to deal with the fact that very few of their fellow human beings seem interested in going for the "carrot" the rest of us desire so passionately, of space exploration, settlement, and development.

As the author of 22 science fiction novels, from The Probability Broach in 1980 to Tom Paine Maru, Forge of the Elders, and most recently, The American Zone, I've tended to be optimistic about the future and have regarded my fellow sapients in a fairly positive light.

But political events following September 11, 2001 have convinced me that people are often readier to respond to the stick of impending doom than any carrot we can offer them. And the mass media, who have nothing to sell but fear itself, are even readier to encourage that attitude.

Okay, then, how about this…?

Last June, a small asteroid "about the size of a football pitch" passed within 75,000 miles of the Earth—that's three times closer than the Moon—in what the mass media were quick to describe as a "near-miss", but which I'm certain George Carlin would have called a "near hit!" The eerie part of the story, for me, anyway, is that the asteroid wasn't spotted until three days after its closest approach to Earth.

Had it struck the Earth, it would have done so with a force of about ten megatons, roughly a thousand times the energy released by the Hiroshima A-bomb. Had it struck almost anywhere in the northern hemisphere it could have levelled a large city and killed millions of people.

A third of the distance to the Moon.

Only three times the circumference of the Earth.

We should have felt the breeze as it flew by.

A couple of weeks ago, I'm sure you recall how we all heard about a much larger asteroid, about 1.2 miles in diameter, that may or may not miss us in 2019. If it misses, it will have yet another chance in 2060. If it hits, it will be a true continent-wrecker, which human civilization—not to mention we and our children—probably won't survive.