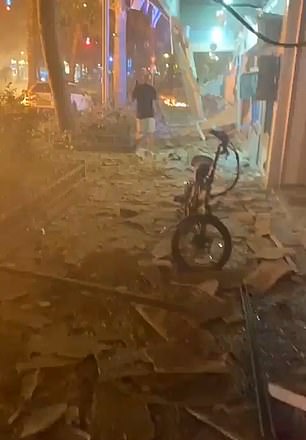 Terrifying video footage has emerged of a rocket launched by Hamas militants blowing up a bus in Israel as civilians watched on in horror.

Video shows the city bus erupting in flames, with black smoke billowing from the burning vehicle, in the central city of Holon, just south of Tel Aviv, last night.

In other videos, dozens of Israel's Iron Dome defence system's missiles can be seen lighting up the night sky yesterday as they shot down a bombardment of rockets fired by Hamas militants.

Residents of Tel Aviv, Israel's most populous city, hid in their houses and under shelters as scores of rockets were seen flying overhead before they were struck down by Israeli missiles.

It comes as Israel said the militants have fired more than 1,050 rockets since Monday, killing five civilians, including an Arab-Israeli girl in the city of Lod in the early hours of this morning.

Around 200 of the rockets fell short and landed inside Gaza, injuring many of their own, while the vast majority have been intercepted by the Iron Dome system.

In Tel Aviv a scene of carnage unfolded last night as a bus was engulfed by flames after being hit by a rocket. Further along the street, other vehicles were also on fire.

The flames from the bus leapt up into the air while explosions could be heard from the vehicle as black smoke billowed into the air.

Sirens blared from nearby cars rocked by the explosion and wreckage from nearby buildings was strewn across the ground.