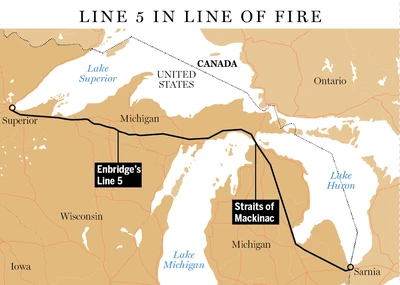 OTTAWA — A Canadian company on Wednesday defied an order to shut down an oil and gas pipeline that passes through Michigan, flouting a directive from Gov. Gretchen Whitmer in a contest of wills that threatens to aggravate U.S.-Canada relations.

She cited "persistent and incurable violations" of the permission, known as an easement, and concerns that potential leaks could pollute a vast area of the Great Lakes and endanger drinking water for millions of people in both countries.

The state had given Enbridge, the company that owns the pipeline, until Wednesday to shut it down. But the pipeline's future is currently in mediation ordered by a U.S. district court in Michigan, and Mike Fernandez, senior vice president of Enbridge, said that the company, based in Calgary, Alberta, will only stop the flow of oil if ordered by a court.