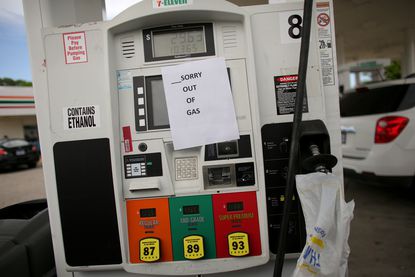 The price on the pump was $6.999 at a Richmond BP station earlier this week.

There have been gas shortages across the Southeast after a pipeline operation was forced to closed down for days after a cyberattack.

"I pulled in, I start pumping my gas and then I realized I put $80 worth in my truck," another driver told TV station 8News. "The lady next to me said she put $100 in her car. She just started crying because she said her car don't take that much."

Price gouging laws are in effect in Virginia as part of a State of Emergency declared Tuesday by Gov. Ralph Northam.  Residents were encouraged to file price gouging complaints if they felt they were being unfairly charged for goods.

Colonial Pipeline said Wednesday it has restarted operations after being hit by a cyberattack last week, leading to long lines at gas stations in the Southeast, but said it will take "several days" for its delivery supply chain to return to normal.

The pipeline, which delivers about 45% of the East Coast's gas, suffered a ransomware attack — leading to distribution problems and panic-buying, draining supplies at thousands of gas stations.