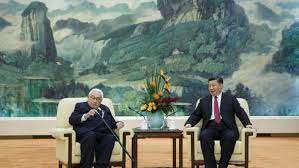 Henry Kissinger, 97, Henry the K. for those he keeps close, is either a Delphic oracle-style strategic thinker or a certified war criminal for those kept not so close.

He now seems to have been taking time off his usual Divide and Rule stock in trade – advising the combo behind POTUS, a.k.a. Crash Test Dummy – to emit some realpolitik pearls of wisdom.

In realpolitik terms, this "kind of Cold War" is already on; across the Beltway, China is unanimously regarded as the premier U.S. national security threat.

Kissinger added U.S. policy toward China must be a mix of stressing U.S. "principles" to demand China's respect and dialogue to find areas of cooperation: "I'm not saying that diplomacy will always lead to beneficial results…This is the complex task we have… Nobody has succeeded in doing it completely."

Henry the K. actually must have lost the – diplomatic – plot. What Chinese Foreign Minister Wang Yi and Russian Foreign Minister Sergey Lavrov are now involved in, full time, is to demonstrate – mostly to the Global South – how the American-enforced "rules-based international order" has absolutely nothing to do with international law and the respect of national sovereignty.

BREAKING: There's A DEEPER Truth To The Unrest!