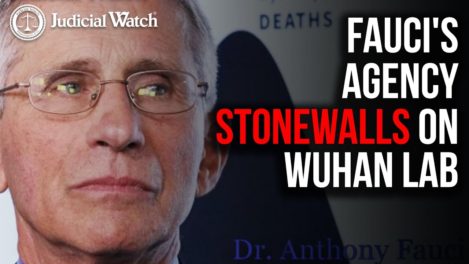 According to Judicial Watch, the lawsuit was filed after the National Institutes of Health (NIH) rejected an April 22, 2020, FOIA request for:

1. All internal NIAID communications regarding the Wuhan Institute of Virology in Wuhan, China;

2. All agreements, contracts and related documents between NIAID and the Wuhan Institute of Virology; and

3. All records, including agreements, funds disbursement records and related NIAID communications regarding a reported $3.7 million in grants provided by NIH to the Wuhan Institute of Virology.

Documents show that the Wuhan Institute of Virology used a $3.7 million grant from the U.S. government to conduct coronavirus studies on mammals captured more than 1,000 miles away in Yunnan, according to the Daily Mail in April 2020.

In April 2020, the National Institutes of Health (NIH) halted funding for a grant to the nonprofit EcoHealth Alliance, which "had previously established a partnership with a virology laboratory in Wuhan, China," but in August, the NIH awarded the EcoHealth Alliance a $7.5 million grant. According to reports, the grant would "focus on Southeast Asia and the emergence of coronaviruses; filoviruses, the family responsible for Ebola; and paramyxoviruses, a family of viruses that includes measles and mumps."