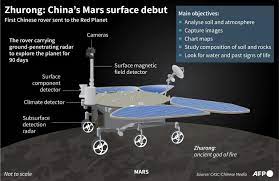 The tricky touchdown, if successful, would come a few months behind America's latest probe to Mars, as Beijing presses ahead with its increasingly bold space ambitions.

"Based on current flight conditions, the Tianwen-1 probe intends to choose an opportunity to land ... in the period from early morning Saturday to Wednesday Beijing time," the China National Space Administration said in an online statement.

The launch of the Tianwen-1 Mars probe last July marked a major milestone in China's space programme, which Beijing views as a sign of its rising global stature and technological might.

The spacecraft, which entered Mars' orbit in February, has now reached "crucial touchdown stage", the state-run tabloid Global Times said Friday. It will land in a vast northern lava plain known as the Utopia Planitia.

Speculation about a Saturday landing has been rife on social media after a top spaceflight expert estimated the rover -- named after a mythological Chinese fire god -- would reach the surface in the morning Beijing time.