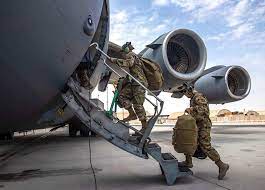 The US has handed over Kandahar Airfield in southern Afghanistan to the Afghan military, Stars and Stripes reported on Thursday. The base was one of the largest for the US and NATO coalition in Afghanistan and held an estimated 30,000 troops and contractors at the height of the US presence in the country.

"The handover of Kandahar Airfield was coordinated, both with senior leaders in [the Afghan government] and with our Afghan partners in the 205th Corps," Col. Sonny Legget, a spokesman for the US and NATO coalition, said on Thursday.

An unnamed US military official told Stars and Stripes that coalition personnel might stay in Kandahar for "a day or two" to address security concerns. Afghan officials confirmed the US departure.

"The Americans have vacated their bases and they have left," said a spokesman for Afghanistan's 205th Atal Military Corps. Gen. Faqir Qowahi, the commander of the military side of the Kandahar Airport, said the US "left in the night."