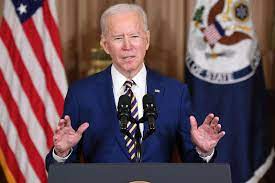 President Joe Biden recently welcomed Japanese Prime Minister Yoshihide Suga to Washington. The two governments issued a statement filled with the usual boilerplate, but included one sentence that caught Beijing's eye: "The United States stated its unwavering support for Japan's defense under the U.S.-Japan Treaty of Mutual Cooperation and Security, using its full range of capabilities, including nuclear."

Was the U.S. really prepared to go to nuclear war with the People's Republic of China over a Sino-Japanese territorial spat, asked the Chinese?

In fact, it is a question that the PRC might be asking frequently. The Biden administration has been freely spreading security guarantees over territorial detritus scattered throughout the Asia-Pacific.

For instance, at the recent Suga-Biden summit, the two governments: "reaffirmed the fact that Article V of the Treaty [which holds both parties to "act to meet the common danger"] applies to the Senkaku Islands." That is, Washington is prepared for war, in which it might use nuclear weapons, to defend five islands and three reefs with no inhabitants and of no value other than the sovereignty they confer over surrounding resources. Territory, in other words, to which the PRC has a defensible claim but which Japan refuses to even discuss.

What really happened on Capitol Hill on Jan 6?

Report: Kamala Was on a "Secret Mission" in Guatemala That Had Nothing to Do With "Th

Macron seals his bromance with a laughing Joe Biden - and takes a swipe at Trump...

TRUTH IS OUT THERE Congress to receive Pentagon UFO report TODAY –