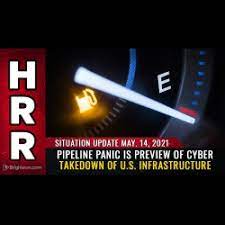 The goal is clear: The systematic dismantling of the United States of America, plunging it into chaos and collapse, all while invoking race wars, mass starvation, political unrest and widespread disease.

The pipeline takedown has thrust over 10,000 gas stations into gasoline outages, and this emergency is already interfering with trucking and truck deliveries of food, lumber and industrial materials.

It's also showing the shocking vulnerability of America's computer-controlled infrastructure, because if a critical pipeline can be taken down so quickly due to remote sabotage, what other components of the U.S. infrastructure are already compromised and ready to be taken offline at a moment's notice?