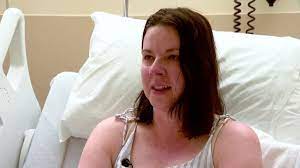 "This has been a nightmare," Brandy McFadden told WSMV-TV's News 4 Program in Nashville as she fought tears. "I got my shot, just trying to do due diligence. I never expected this to happen, at all."

The day Brandy McFadden got her second dose of the Pfizer/BioNTech vaccine on April 16, she "just started not feeling great," she told the local news station.

By the following afternoon, McFadden said she couldn't walk and had excruciating neck pain. "It just started progressively getting worse and I just started screaming in pain at the top of my lungs."

McFadden's husband took her to the emergency room at Vanderbilt University Medical Center. Six days later, the local news stations interviewed her at the hospital where she had undergone a CT scan, MRI, EMG, and blood work, all of which were unrevealing about what was happening to her. "As far as to answers as to why this happened, they don't know," McFadden told News4.

She had regained movement in her arms, and could wiggle her toes one week following her shot.

A similar case in Pittsburgh

McFadden was in touch with a woman in Pittsburgh who had a similar experience. Rachel Cecere, 33, told WPXI-TV news that she woke up paralyzed from the neck down 12 hours after her first dose of Pfizer's COVID-19 vaccine.  "It was the scariest thing in the world to go to sleep completely fine, to wake up 1:30 in the morning and not be able to move at all," the woman told Channel 11