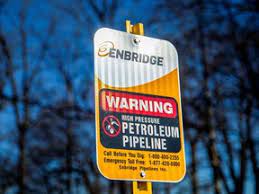 One of the nation's most vicious dictators, Whitmer proclaimed that the oil and gas pipeline, which is run by Canadian energy company Enbridge, had to shut down on May 12 because, should the pipeline burst, leak, or become damaged, Michiganders might be put at risk.

As of this writing, Enbridge has refused to comply with Whitmer's unlawful decree, and it is backed by numerous top Canadian officials. The last thing North America needs right now is a worsened energy crisis that leaves them without fuel.

For the past 67 years, Enbridge has been moving oil and gas from Western Canada through Michigan and the Great Lakes area to refineries in the province of Ontario. According to Whitmer, the pipeline is suddenly too dangerous to continue operating, just as much of the Southeast is suffering from gasoline shortages.