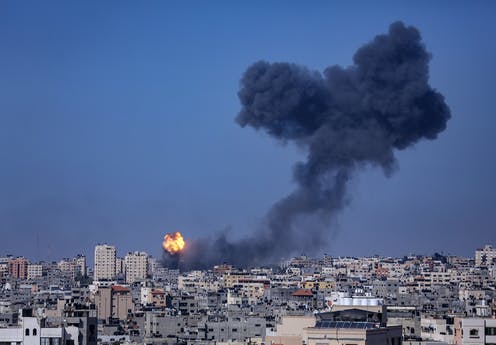 Yet despite international efforts to broker a cease-fire and the rising death toll (mostly on the Palestinian side) Israeli Prime Minister Benjamin Netanyahu signaled the fourth war with Gaza's Hamas rulers - which was sparked by unrest in Israeli-annexed east Jerusalem, and has seen the death toll in the densely-populated Gaza Strip rise to 181, and to 10 in Israel - would rage on.

Speaking in a televised address, Netanyahu said on Sunday evening that the attacks were continuing at "full-force" and will "take time." Israel "wants to levy a heavy price" from the Hamas militant group, he said, flanked by his defense minister and political rival, Benny Gantz, in a show of unity even as a growing chorus of skeptics is asking if Netanyahu is just killing innocent people as a diversion from his own political scandals and as a means to stay in power.

Sunday's airstrikes hit a major downtown street of residential buildings and storefronts over the course of five minutes after midnight, destroying two adjacent buildings and one about 50 yards (meters) down the road. According to AP, whose HQ in Gaza was flattened following an Israeli attack on Saturday, the Israeli air assault early Sunday was the deadliest single attack since heavy fighting broke out between Israel and Hamas nearly a week ago, marking the worst fighting here since their devastating 2014 war in Gaza.

The Gaza Health Ministry said 16 women and 10 children were among those killed, with more than 50 people wounded, and rescue efforts are still underway. Earlier, the Israeli military said it destroyed the home of Gaza's top Hamas leader, Yahiyeh Sinwar, in a separate strike in the southern town of Khan Younis. It was the third such attack in the last two days on the homes of senior Hamas leaders, who have gone underground.  The military also said Sunday it also struck the home of Sinwar's brother Muhammad, another senior Hamas member. On Saturday it destroyed the home of Khalil al-Hayeh, a senior figure in Hamas' political branch. However, since Hamas' leaders have gone into hiding in Gaza in response to the strikes, it is unlikely any were at home at the time of the strikes. Hamas' top leader, Ismail Haniyeh, divides his time between Turkey and Qatar, both of which provide political support to the group.