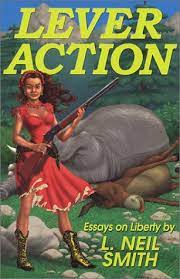 We've had a couple of political knockdown-dragouts in the time I've known her. (Her mother's amiably combative, too.) She can be out-argued. I'm three times her age, twice her size, and have been butting heads this way since the Kennedy Administration. But she will not be intimidated out of the position she defends so nobly (having been indoctrinated into it by her parents and the public school system they adore). Her poise and courage are admirable. The only time I ever threw her off is when I told her (unfairly but incontrovertibly) that she'll find herself agreeing with me in another 10 years.

Lever Actionis my only nonfiction book, so far, a collection of articles and speeches I've written over the past 20 years when I was supposed to be writing novels. My daughter's friend was delighted with the gift. The next time I saw her, she reported that she'd taken it to school where one of her teachers read part of one essay to the class—and immediately proclaimed me to be … a "radical".

Of course I've been proud to wear the label since I was about my little friend's age, follower of Rand that I was, one of Heinlein's children. But it got me thinking about what I mean by "radical" and what other people seem to mean. No doubt to the teacher, I'm what my grandmother used to mean whenever she called me a "communist".