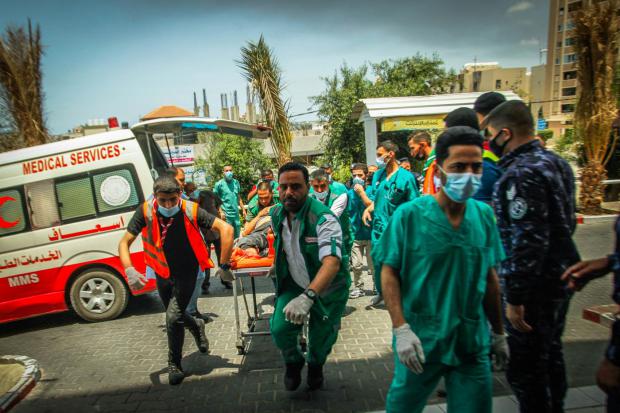 A week's worth of heavy bombardment in Gaza has obliterated a number of buildings and roads, impeding emergency service access to locations affected by the attacks.

According to Palestine's Ministry of Information, over 1,000 residential units have been damaged due to Israeli air strikes, as well as 36 schools and primary healthcare clinics.

The Ministry of Information estimates that $18m worth of damage has been done to streets and infrastructure in the besieged Gaza Strip.

In Gaza, an air strike that struck close to the Remal medical clinic, school and orphanage has caused further strain on health facilities in the area.

Speaking to Middle East Eye's correspondent on the ground, eyewitnesses recounted scenes of terror, and questioned why key locations were being targeted.

"If the Ministry of Health is no longer safe, then where can we be safe?" one man said. "These are war crimes, and it's not acceptable to stay silent about it."

As plumes of smoke engulfed the area, other key locations such as the Ministry of Health, NGO offices and the Reuters Gaza bureau were also impacted by the bombardment.

Homelessness Is Becoming A Crisis Of Epic Proportions In The US