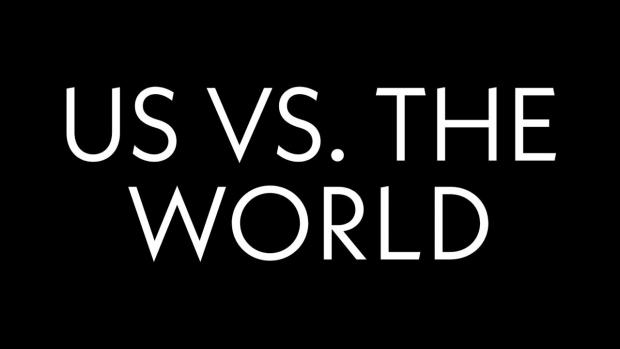 America's response to the increasing economic success of China and other nations that until recent decades were impoverished former colonies is to organize its own allies - especially the English-speaking countries - to become a totally separate global economic trading and military alliance standing against that "third world" - and thereby force all non-aligned nations to have to either choose to be allied with the United States or else become conquered by the U.S. and its allies. It's "Us," or "Them," all the way. The top "enemies" (the "Them") are the same countries that America and its allies were against during the anti-communist Cold War, Russia and China, even though Russia is no longer communist, and China has become a mixture between communism and capitalism.

America has on its side Saudi Arabia, Israel, Qatar, UAE, and all four of the fascist nations during World War II: Germany, Japan, Italy, and Spain — as well as many other nations.

Russia and China were both allies of the United States during the war against Hitler and his allies, but Franklin Delano Roosevelt had to fight against considerable American support for the fascist powers (overwhelmingly coming from Republicans) during the years before Japan's Pearl Harbor attack on 7 December 1941. (In fact, on 23 November 1937, Hitler's agents Kurt von Tippleskirch and Manfred von Killinger, two Barons, were secretly negotiating with top Republicans — including the racist Irénée du Pont — what would have been the Duponts' second coup-attempt against FDR, but neither attempt succeeded.) As soon as Harry S. Truman (whom the Democratic Party's billionaires chose to be FDR's VP in 1944) became President on FDR's death on 12 April 1945, the alliance with the Soviet Union ended, and the Cold War gelled in Truman's mind on 25 July 1945 because of advice from General Dwight Eisenhower, whom Truman practically worshipped. On 19 June 1945, Truman wrote to his wife, Bess, "He's done a whale of a job. They are running him for President, which is O.K. with me. I'd turn it over to him now if I could." And, on 25 July 1945, Ike told Truman that either the Soviet Union would conquer the world or else America would — and this apparently convinced Truman to go for global empire and to conquer the Soviet Union.