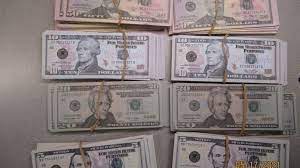 The shipments arrived at Chicago's International Mail Facility (IMF) between May 15 and 17, destined for cities in several states including Illinois, Indiana, New York, and Kentucky. The fake currencies came in the form of $5, $10, $20, $50, and $100 bills.

One shipment was destined for the Bronx, New York containing 976 $100 bills. Another shipment was headed to Louisville, Kentucky containing 101 $20 bills and 103 $50 bills. All of these shipments were manifested as prop money.

"Our CBP officers are always on the alert watching for any type of prohibited shipments that come through the IMF," said Shane Campbell, area port director-Chicago, according to a statement.

He added, "By stopping these shipments we are protecting our financial institutions, businesses, and the public."

China remains the top source of fake goods entering the U.S. market. According to statistics from the U.S. Department of Homeland Security, CBP made 27,599 seizures in the fiscal year 2019. These goods would have had an estimated retail price of over $1.5 billion if they were genuine.

Among these seizures in 2019, 13,293, or 48 percent, originated from China, followed by Hong Kong with 9,778 seizures, or 35 percent. The top category of seized products was counterfeit watches and jewelry, at 15 percent, followed by apparel and accessories at 14 percent.