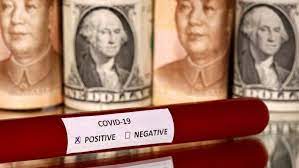 First, China announced it was effectively banning its banks from allowing crypto currencies;

Second, there was a massive collapse (-30%) in crypto, before the usual combination of tweets, book-talking, and magical thinking helped to push many back up 30% again, hence 'only' ending down around 10% on the day – nothing to see here, move along(!);

Third, the Fed's April minutes suggested, as Philip Marey puts it, that: "if the economy continued to make rapid progress toward the Committee's goals, it might be appropriate at some point in upcoming meetings to begin discussing a plan for adjusting the pace of asset purchases. So we are heading for a summer of taper talk!" - and we all know how taper talk can play out in markets. The Fed also argued, again, that inflation was "transitory" – but as Philip notes, that came before the spike in consumer inflation expectations in the Michigan confidence survey;

Fourth, a PBOC official stated China has to give up its control over the currency's exchange rate eventually if it wants to achieve greater global use of CNY; that the exchange rate will have to be determined by global market participants; and this will allow China to have free cross-border capital flows and pursue an independent monetary policy. "We need to admit that under the condition of yuan internationalization, we won't be able to control the exchange rate, and China's central bank has to let go of exchange-rate goals in the end," Zhou Chengjun, director of the People's Bank of China's finance research institute, added. So far so obvious – and always elusive for China for the very obvious reason that giving up control means giving up,...control! Yet crucially, Zhou added CNY will appreciate against the USD in the long term as a result of China's economic growth vs. the Fed's repeated monetary easing, according to the speech.

See a pattern forming? It looks like both the Fed and the PBOC are deeply concerned about commodity inflation: indeed, the PBOC have been vocal about it for some time. As such, they are perhaps happy to coordinate to some extent – or it's just a happy coincidence… The above steps/messages confront their current joint threat in that: