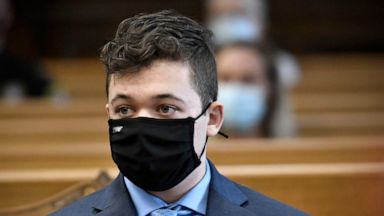 Kenosha gunman Kyle Rittenhouse has hired a new defense attorney ahead of his first in-person court appearance ahead of his trial in November.

The 18-year-old appeared in person before Kenosha County Circuit Judge Bruce Schroeder for the 20-minute pre-trial hearing on Friday.

Court records were updated right before the hearing to show that Rittenhouse had hired a new criminal attorney, Corey Chirafisi.

Chirafisi will serve as co-counsel to his current attorney Mark Richards.

Rittenhouse, who is charged with fatally shooting two people and wounding a third during protests in Wisconsin last August, did not speak during the hearing.

Prosecutors and Rittenhouse's attorneys confirmed during the hearing that the trial will begin November 1 and will last roughly two weeks.

In a sign of the intense publicity surrounding the case, they also told the judge they plan to send out questionnaires to prospective jurors to ask them about their background and beliefs.

The questionnaires can help attorneys decide whom to strike from the pool.

Attorneys in the trial of a white former police officer who was convicted of killing George Floyd in Minneapolis also used questionnaires.

The Jan. 6th Show Trials Threaten All of Us