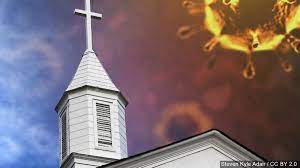 Why? Because we expect evil from politicians and bureaucrats. Tony "Can't Keep My Story Straight" Falsi behaves according to his nature; anyone who trusts this lifelong Marxist is as ludicrous a fool as he is. Ditto for the other bureaucrats in "Public Health."

As for that roll of criminals ranging from Governor "Nuisance" Newsom in Californiastan through "Killer" Cuomo in The People's Democratic Republic of New York, they're politicians. 'Nuff said.

But Parson Goat—graduate of seminary, preacher of the Word of God, supposedly devoted to Jesus Christ and His Gospel—well, much was given him, and so we require much from him.

Alas, he's failed to deliver. To us and to the Lord, that is.

But he's cooperated handsomely with Our Rulers to spread COVIDCon ever since he closed God's house in direct violation of Scripture. Then, when politicians permitted him to re-open, he forced his sheep[le] to muzzle themselves, despite the Bible's injunction to honor differing convictions.

Why Are Soros And Gates Buying UK COVID Testing Company?